Roper–300x151BIRMINGHAM, Ala. – An Alabama police chief is under fire from a prominent atheist activist organization for conducting prayer walks in his city as a way to fight crime.

The Madison, Wisconsin-based Freedom from Religion Foundation (FFRF) recently sent a letterto Birmingham Police Chief A.C. Roper to assert that his actions are unconstitutional and offensive to non-Christians. 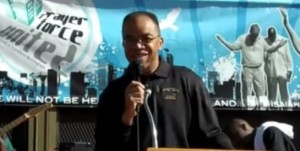 Roper, an ordained minister, is involved with the initiative Prayer Force United, a coalition between the chief, area churches and local residents to host monthly prayer walks and faith-based gatherings in areas of Birmingham that are most affected by crime.

“We understand that a police cruiser leads these prayer walks with lights flashing, followed by a truck with a sound system that ‘cranks up some gospel music,’” the letter from FFRF outlined. “At the end, a ‘worship team [is] going full bore, just praising Jesus.’ Then the ‘local pastor introduces the police chief,’ and you then give a sermon invoking Jesus several times.”

The group stated in its correspondence to Roper that the organization finds a promotional video of the effort to be inappropriate, as it shows the chief stating that he is “claiming the city of Birmingham for the Kingdom of God” and declaring that the largest problem in the city is a “lack of Godliness.”

“As the chief, I consider myself the chief servant, that’s all just the servant—the servant of Almighty God, the servant of my king, King Jesus. A name that’s higher than every other name and at His name every knee will bow,” Roper is also quoted as proclaiming at one prayer event. “At that name crime will bow. … At that name, homicides are bowing. At the name robbery and thefts and burglary are bowing because that name has all power.”

FFRF contends that Roper’s statements, being made in his official capacity, are unlawful because they promote Christianity and religion over non-religion.

“If you wish to participate in religious events, you must do so as a private citizen, without using your office, title, and badge,” the letter stated. “Prayer Force United’s explicitly stated goals are all religious—your official participation is therefore unconstitutional.”

But Roper told reporters this week that he is not ashamed of his Christian beliefs and is unapologetic for the work that has been done to fight crime in Birmingham.

“Obviously, it’s no secret that I support the prayer walks and many other faith-based community events as one tool in our overall crime-fighting strategy,” he told AL.com. “We have built strong partnerships with various groups, and I believe they have done a wonderful job committing their assets and assisting us in addressing various issues that affect crime.”

While he has not suggested that he will comply with FFRF’s demands, Roper insists that he is inclusive of all religions in his position as chief.

“We are and will continue to be extremely inclusive, including supporting interfaith events as we have in the past,” he told local television station ABC 3340.