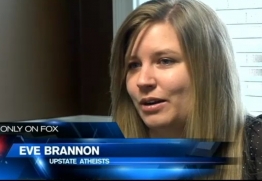 The president of a South Carolina atheist organization will decide what church she will attend depending on how high church-goers bid for her attendance in an auction called, “Take an Atheist Leader to Church,” posted on eBay.

Eve Brannon of Upstate Atheists has spread the word about her auction to local churches with the intent to collect all funds to sponsor her organization’s charitable events this year. She plans to attend the church service of the highest bidder, along with her daughter, which she says will be her first time attending since leaving her former Baptist faith.

“I’m curious to see if anything’s changed or if it’s the same as it was when I was a kid,” said Brannon, reports Fox Carolina. “I’m certainly not trying to infiltrate a church. I’m going with an open mind. I’m going to be as positive as I can. I’m taking my daughter as a learning experience. I don’t want anyone to think negatively about it at all.”

As of Friday afternoon, the auction had reached $110, with 32 bidders in line to take Brannon to church. One of them is pastor Marcus Buckley of Riverside Baptist Church in Greer, S.C., who says he is interested in having a civil conversation with Brannon about the Gospel despite their difference in beliefs.

“I believe so strongly in the Gospel that I want to put our money where our mouth is,” said Buckley. “If taking someone out to dinner is going to earn me the right to share the Gospel with them, then why in the world would I not buy them dinner?”

Although the atheist group leader says she is open to attending church, she has placed limits as to what she will and will not do, as noted in her auction’s description, to ensure her experience is positive.

“Your bid is for me and my 4-year-old daughter,” Brannon writes. “She must be able to stay with me at all times. We will attend any church on a Sunday morning. We will listen to the sermon and I agree to be acknowledged as a guest. I will speak to members of the congregation if you wish and what led me to the path I chose. I’m fine with speaking publicly, answering questions, or simply sitting in the crowd. I will NOT question or refute anyone’s beliefs. I will be respectful of all members of the church.”

Brannon’s initiative takes after a similar auction posted by Hemant Mehta on eBay in 2006. Mehta, an atheist blogger raised in the Indian Jain faith, attended the church of the highest bidder while proceeds were donated to the Secular Student Alliance. Jim Henderson, a former pastor, won the bid for $504. Following his experience, Mehta went on to visit other churches and published a book about his experiences in each congregation.

He says Brannon’s idea is a great opportunity for Christians to evangelize and calls her effort “fantastic,” according to South Carolina-based Herald-Journal.

“What Brannon is doing is saying she’ll go to church, listen to what they have to say, and if she wants, respond to it,” said Mehta. “It’s a perfect opportunity for Christians to bring their A-game and make their case for Christ to an atheist who’s willing to listen to everything with an open mind. Considering that many evangelical churches encourage congregation members to bring unchurched people to the pews, this ought to be a welcome experiment that I hope many churches consider bidding on.”