SAINTS, PLEASE DONT THINK IM COMING @ ANDY MINEO OR ANY OTHER “HOLY HIPHOPER” BECAUSE I WANT PUBLICITY FROM GOING AT THEM…OR BECAUSE THEY RAP AS WELL… IT HAS NOTHING TO DO WITH PERSONAL AGENDAS…THIS IS ABOUT FALSE BRETHEREN CREPT IN UNAWARE(YOU CAN TELL WHO IS DOING GOSPEL MUSIC FOR CHRIST AND WHO DOES IT FOR THE WORLD)…THEY PRETEND TO BE CHRISTIAN WHILE LIVING AND ACTING AS WORLDLY AS THE SECULAR RAPPERS… KANYE WEST HAS BLASPHEMED AGAINST JESUS MORE THAN I CAN COUNT AND THIS “ANDY” ADMIRES HIM AND WOULD LIKE TO DO A TRACK WITH KANYE…??? THIS IS MADNESS… G CRAIG LEWIS WARNED US YEARS AGO ABOUT THESE EVIL WORKERS WHO WOULD BLEND THE HOLY AND THE PROFANE TOGETHER, MIX LIGHT WITH DARKNESS!!! SO A YOUNG CHRISTIAN WHO LISTENS TO “ANDY” SEES HIM DO A TRACK WITH KANYE AND THEN THE YOUNG BOY GOES OUT AND BUYS KANYES ALBUM ASSUMING KANYE IS A CHRISTIAN AND BECOMES SPELLBOUND BY THAT SODOMITE ANTICHRIST RAPPER(THIS IS CALLED THE TROJAN HORSE METHOD OF WAR)!!! THIS IS WHY I STAND AGAINST THEIR FAKE “CHRISTIAN” MOVEMENT!!! AND ANY ONE THAT DISSAGREES IS UNDER A SPELL AND HAS LIFTED THESE FAKE CHRISTIAN RAPPERS UP AS IDOLS!!! SAINTS WAKE UP AND GET READY!!! THE LORD IS COMING BACK AND HE IS GONNA SEPARATE THE WHEAT FROM THE TARE!! AND WE WILL SEE IF I WAS JUST “HATING” ON THEM OR IF I WAS LEAD BY JESUS CHRIST TO EXPOSE THESE EVIL DOERS!!! DONT FORGET… THE CHRISTIAN MUSIC INDUSTRY IS AN ARENA THAT THESE WORLDY MUSICIANS WANT TO CREEP INTO, AND OBVIOUSLY THEY WORK FOR SATAN…WOULDNT THEY WANT TO DESTROY ANYTHING CHRISTIAN?? AND HOW CAN THESE WORLDLY RAPPERS AND MUSICIANS CREEP IN AND DESTROY THE CHRISTIAN YOUTH..??? THEY CAN CREEP IN BY FAKE CHRISTIAN RAPPERS AND SINGERS SIGNING OFF ON THEM!!! COME ON YALL YOU KNOW WAHT IM SAYING MAKES PERFECT SENSE. ANY WAY HERES THE WHOLE ARTICLE FROM ” MTV ”
Andy Mineo Wants A Word With Kanye West
Hip-hop newcomer talks to MTV News about wanting to ‘see if something cooks up’ with the Yeezus MC. 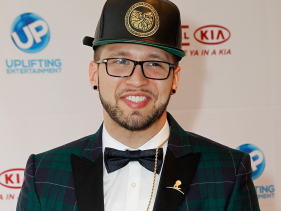 Andy Mineo knows exactly who he is. As an MC, the Syracuse, New York, native is as skilled as any of today’s crop of rap newcomers — and he proved it in December on the “RapFix Live” all-cypher show, where he rhymed alongside 360, Bizzy Crook and Emilio Rojas.

There is a difference between Mineo and most of his rap contemporaries, though; if you listen closely, his bars are inspired chiefly by his Christian faith. Ask his fans, and you’ll find that’s all a part of his appeal.

In April, Andy released his first studio album, Heroes For Sale, on Lecrae’s Reach Records. The LP debuted at #11 on the Billboard 200 after Mineo was able to move about 28,000 copies in the first week of release.
Sonically, tracks like the 808-laced “AYO!” and electric “Uno Uno Seis” fit right in with rap’s current crop of hits and shoot down any stigma on what Christian rap should sound like. From the sounds of it, it’s only a matter of time before Mineo mixes and mingles with his big-name rap contemporaries.

“I’d love to get in a room with Kanye [West] at some point, have a conversation, and see if something cooks up,” Andy told MTV News on Tuesday (January 7). “Obviously he’s a legend already. His track record is amazing and I think he’s in a unique place in his faith journey with Yeezus and seeing his live show I’m like, ‘Wassup? What’s going on with you, man?’ I think it would a great conversation and obviously a collaboration over that would be dope,” he said.

In addition to the religious themes that Kanye West has exhibited throughout his career, artists like J. Cole, Pusha T and Big K.R.I.T. are just a few MCs who’ve been known to address their faith in their music. Rick Ross and Jay Z’s recently released “Devil is a Lie” is just the latest examples of secular MCs tackling religious themes.

“I think my presence in hip-hop, if we were able to mix it up would lead to some good conversation, probably some good music too,” Mineo said. “A lot of these dudes grew up in churches, a lot of these dudes have some kind of history, but they refuse to talk about it and that might create some space for us to talk about it on record. I think that would be really cool to see happen in hip-hop.”