Pope Francis on Sunday called for “constructive dialogue” in Ukraine, saying he was praying in the Vatican for the country and for those who have lost their lives in the ongoing unrest there. Following the Pope’s speech to thousands of faithful who gathered in St. Peter’s Square, two doves were released by children standing alongside his UN-holiness.
However, as soon as the birds of peace took off, they were immediately attacked by a crow and a seagull. The crowd gasped as one dove broke free from the gull, losing some feathers, and another one was repeatedly pecked at by the crow. It was not clear what happened to the doves after they flew off(CLICK ARTICLE TITLE FOR PICTURES…). 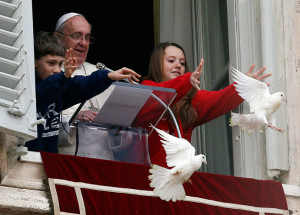 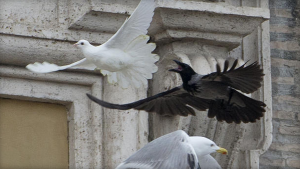