THIS IS IT SAINTS!!! THE SODOMITES HAVE WAGED WAR AGAINST THE TRUE CHURCH…. GET IN THE LORD!!!! 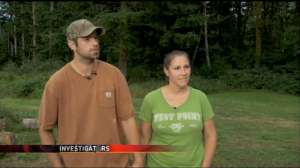 Oregon’s Bureau of Labor and Industries (BOLI) announced Friday that their investigators had found that the Christian owners of Gresham bakery, Sweet Cakes by Melissa, guilty of violating the civil rights of a lesbian couple for refusing to bake their wedding cake.

The Christian couple, Aaron and Melissa Klein, became national news a year ago after citing their religious beliefs in refusing to bake a cake for the wedding of lesbian couple Rachel Cryer and Laurel Bowman of Portland. Last September after an abrupt shutdown of their business the couple charged that gay activists killed. it with “mafia tactics.”

Charlie Burr, a spokesman for BOLI said Friday that investigators found significant evidence that the Kleins discriminated against the couple unlawfully because of their sexual orientation, according to The Oregonian.

It is illegal in that state to discriminate against gay, lesbian, bisexual and transgender people in public places like restaurants and bakeries in Oregon.

Reacting to the announcement on the bakery’s Facebook page Friday, Melissa said she was experiencing “peace” despite being embroiled in the controversial case.

“To all of you that have been praying for Aaron and I, I want to say thank you. I know that your prayers are being heard. I feel such a peace with all of this that is going on. Even though there are days that are hard and times of struggle we still feel that the Lord is in this. It is His fight and our situation is in His hands,” she wrote.

“We received papers from BOLI yesterday (Thursday) and they have made their decision that we have apparently discriminated. From what we have gathered we now have to wait to find out what the fines will be within 60 days. I can’t say much more but will update when I’m able to. Please continue to pray for our family. God is great, amazing and all powerful. I know He has a plan,” she added.

A conciliation process between the lesbian couple and the Christian bakers is expected to be facilitated by the state, and if a settlement cannot be reached BOLI might pursue charges before an administrative law judge.

Lawyer for Cryer and Bowman, Paul Thompson, said the findings of the investigation was bittersweet for his clients. Herbert Grey, the attorney for the Kleins said they were not surprised by the outcome of the investigation. He said they will take part in the conciliation process but have no intention of backing down from their position that baking the cake would have violated their Christian beliefs.

As of Monday morning, the post on the bakery’s Facebook page had attracted nearly 700 comments, many of which were supportive of the decision of the bakers.

“Melissa, don’t give in to the haters. You go right on practicing what you preach. The true intolerance in the world today is with liberals who refuse [to] give what they themselves demand!” wrote Jeff Scharn.

“God bless you and your husband, Melissa. You stood up for your faith. If I don’t like something done to me at a place of business, then I go someplace else. Someone else will take my money. But like small children who didn’t get their way, this gay couple decided that wasn’t enough and now you both are being punished by the state,” noted Nicole Hernandez