LORD HAVE MERCY… SAINTS I KNOW IT SEEMS LIKE IM ALWAYS TELLING YOU TO WAKE UP AND PRAY, FAST ECT… BUT I MEAN IT!!! WE AINT DOING ENOUGH YALL, EVIL IS RISING UP AND WE NEED TO BE POWERED UP BY THE HOLY GHOST TO COMFRONT THIS WICKEDNESS, SAINT JUST STOP AND IMAGINE WHAT IS GOING ON IN THESE OTHER COUNTRIES WHERE YOU JUST MAY BE KIDNAPPED AND TOURTURED, AS THEY TRY TO FORCE YOU TO CONVERT TO ISLAM…. PLEASE PRAY FOR THE STRENTH OF THESE SISTERS THAT EVEN UNDER DEATH THEY WILL NEVER RENOUNCE JESUS AS THEIR LORD…. MAY YHWH SEND ANGELS TO BIND UP AND BREAK THE SPIRIT OF ISLAM AROUND THE WORLD, AND THAT MANY WILL BE SET FREE FROM THAT EVIL LIE, IN THE NAME OF THE LORD JESUS CHRIST!!! SAINTS STOP BEING AFFRAID!!! DO NOT FEAR HIM WHO CAN KILL YOUR BODY ONLY, BUT RATHER FEAR HIM WHO CAN KILL BOTH BODY AND SOUL IN HELL… 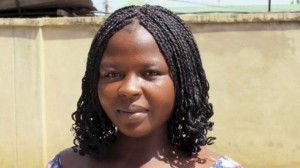 The kidnapping of a young Christian woman and her forced conversion to Islam is part of an inhuman new strategy used by the Nigerian terrorist group Boko Haram to rid the region of Christians, experts told FoxNews.com.

After her escape from captivity of the radical Islamists, the 19-year-old Hajja told Reuters “I can’t sleep when I think of being there.”

Boko Haram ruthlessly exploited Hajja as its domestic slave, compelling her to clean and prepare meals for the Islamic militia. Her chilling account of her captivity included Boko Haram using her as bait to lure civilian Nigerians working with the military into murderous traps. She witnessed Boko Haram Islamists slashing the throats of captured civilians.

“If I cried, they beat me. If I spoke, they beat me. They told me I must become a Muslim but I refused again and again,” said Hajja, who spent three months as a slave in the fanatic Boko Haram organization.

“They were about to slaughter me and one of them begged me not to resist and just before I had my throat slit I relented. ”

Hajja said she was forced at knifepoint to convert to Islam. “They were about to slaughter me and one of them begged me not to resist and just before I had my throat slit I relented. They put a veil on me and made me read from the Koran,” said Hajja.

Translated as “Western education is sinful” Boko Haram seeks to establish a Sharia Islamic law state in northern Nigeria; a country with 170 million people that is divided into a Muslim-majority north and a Christian south.

“Boko Haram has a well-established track record of committing heinous attacks against the citizens of northern Nigeria, both Christians and Muslims,” Rep. Eliot Engel, D-N.Y., ranking member of the House Foreign Affairs Committee, told FoxNews.com. “This latest account is just further evidence of why this despicable group must be defeated.”

The U.S. State Department last week designated Boko Haram a Foreign Terrorist Organization. According to the State Department, Boko Haram” is responsible for thousands of deaths in northeast and central Nigeria over the last several years including targeted killings of civilians.”

Lynch called on the U.S. to do more to support the Nigerian government’s efforts to provide additional security personnel to protect northern Christian minorities and clerics and Muslim traditional rulers who denounce Boko Haram attacks, and consider creating a witness protection-like program.

David Cook, a leading expert on Boko Haram and professor of religious studies at Rice University, told FoxNews.com that the kidnapping of Hajja “falls into a pattern of Salafi Jihadis and definitely in the range of things that has been happening in the past five years.”

He said the hallmarks of groups like Boko Haram are “indoctrination, forced conversions, and kidnapping children.” He noted that “just last week they kidnapped a French priest in Cameron.”

Cook, who has written extensively on radical Islam in Nigeria, said Boko Haram has a “stated goal of expelling all Christians in northeastern Nigeria and northern Nigeria in general.”

While the concrete number of Boko Haram fighters is difficult to ascertain, Cook said the figure range from several thousand to as many as 5,000.

A Nigerian diplomat at the Nigerian embassy in Washington, who identified himself as Richard, dismissed the report of Hajja’s kidnapping.

“What you read is absolutely not true,” he said, insisting that Boko Haram has been reined in. “You need to be on the ground.”

The government of Nigeria’s President Goodluck Jonathan—who is a Christian from the south—has waged a military campaign over the last year to root out Boko Haram from the country’s northern regions. Despite his name, Nigeria’s president has encountered tenacious resistance from Boko Haram.

Hajja’s last name cannot be published because she has family members in northern Nigeria who could face reprisals from Boko Haram. She now lives in Nigeria’s capital Abuja.