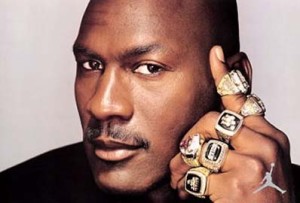 If you’ve watched ESPN at any point in the last week, you know Michael Jordan just turned 50. With six NBA titles, five MVPs, ten scoring titles, 14 All-Star appearances, and many other feats posterized on my childhood bedroom wall, Jordan’s legacy on the basketball court is unmatched. But life off the court, particularly since his final retirement in 2003, hasn’t been so pristine.

In anticipation of Jordan’s 50th birthday, ESPN senior writer Wright Thompson spent some time with Number 23. The product is an Outside the Lines article titled “Michael Jordan Has Not Left the Building,” a fascinating behind-the-scenes glimpse into the mind of the man who revolutionized the world of sports.

Thompson’s piece pulsates with the sense that Jordan isn’t happy. “I would give up everything now to go back and play the game of basketball,” the Hall of Famer confesses. When asked how he replaces it, Jordan simply states, “You don’t. You learn to live with it.”

For almost three decades on basketball’s supreme stage, Jordan lived for the next challenge, the next challenger. Naysayers became friends, for they brought the nightly fuel that reignited his drive to perform, to conquer, to vindicate his name. This insatiable drive to prove himself propelled Jordan to the pinnacle of the sporting world—and motivated him to remain there. Even today, Thompson writes, he cares what his critics say. “He needs to know, a needle for a hungry vein.”

Jordan might have stopped playing basketball, but the rage is still there. The fire remains, which is why he searches for release, on the golf course or at a blackjack table, why he spends so much time and energy on [the Charlotte Bobcats] and why he dreams of returning to play.

The man has left the court, but the addictions won’t leave the man.

Jordan is at the center of several overlapping universes, at the top of the billion-dollar Jordan Brand at Nike, of the Bobcats, of his own company, with dozens of employees and contractors on the payroll. In case anyone in the inner circle forgets who’s in charge, they only have to recall the code names given to them by the private security team assigned to overseas trips. Estee is Venom. George is Butler. Yvette is Harmony. Jordan is called Yahweh—a Hebrew word for God.

Yahweh. I am who I am. I will be what I will be. Not exactly the sort of nickname that fosters meekness.

“My ego is so big now that I expect certain things,” Jordan admits. But, as Thompson observes, this is a natural consequence of life at the very top. “Jordan is used to being the most important person in every room he enters and, going a step further, in the lives of everyone he meets. . . . People cater to his every whim.”

Imagine that life for a moment. Put yourself in his shoes (Air Jordans, of course). You can’t recall the last time you weren’t the most important person in the room. No matter where on Planet Earth you go, you’re king. Thirty years and counting. What would that recognition do to someone? To you?

The Flicker that Fades

Most people live anonymous lives, and when they grow old and die, any record of their existence is blown away. They’re forgotten, some more slowly than others, but eventually it happens to virtually everyone. Yet for the few people in each generation who reach the very pinnacle of fame and achievement, a mirage flickers: immortality. They come to believe in it. Even after Jordan is gone, he knows people will remember him. Here lies the greatest basketball player of all time. That’s his epitaph.

There’s a fable about returning Roman generals who rode in victory parades through the streets of the capital; a slave stood behind them, whispering in their ears, “All glory is fleeting.” Nobody does that for professional athletes. Jordan couldn’t have known that the closest he’d get to immortality was during that final walk off the court. . . . All that can happen in the days and years that follow is for the shining monument he built to be chipped away, eroded. His self-esteem has always been, as he says, “tied directly to the game.” Without it, he feels adrift. Who am I? What am I doing? For the past 10 years, since retiring for the third time, he has been running, moving as fast as he could, creating distractions, distance.

In his supercilious 2009 Hall of Fame speech, Jordan called the game of basketball his “refuge,” the “place where I’ve gone when I needed to find comfort and peace.” Three years later, the restlessness remains.

It turns out the voracious drive that turned a shy North Carolina youngster into a household name comes with a price tag. And as the flicker of immortality fades, Jordan stares in the mirror, wondering where to turn. “How can I enjoy the next 20 years without so much of this consuming me?” he ponders. “How can I find peace away from the game of basketball?”

From Chicago to Calvary

As a Christian, it’s easy to read a piece like Thompson’s and feel discouraged, even disgusted, by Jordan’s egotism. Yet as psychologists clamor to diagnose Jordan’s condition, we feel no surprise. The distance between him and us is, after all, uncomfortably slim. We want to be the most important person in every room; he is. As the apostle might say, who is sufficient for these things?

In the world, status is tethered to performance. It’s the same in the gospel. The difference, however, is that our status as believers is not tethered to our performance, but Christ’s. Only the gospel can offer the resources to combat our pride, expose our emptiness, and flood our hearts with peace.

“How can I find peace away from the game of basketball?” the aging legend asks.

Michael, you never had peace. Triumph and fame, yes, but not peace. James Naismith invented a game that brought you a sense of purpose, of value, of calm. But it was only that—a sense, a counterfeit of the real thing. You will never find life outside the game for the same reason you never found life in it. It’s not there.

The peace you seek isn’t available on a basketball court or a golf course but on a little hill outside Jerusalem. There, Yahweh incarnate hung in the place of sinners—wannabe Yahwehs like you and like me.

You’ve gained the world and found it lacking, Mike. Don’t lose your soul.

Matt Smethurst serves as associate editor for The Gospel Coalition and lives in Louisville, Kentucky. You can follow him on Twitter