Happy New Year!!!! Biblically speaking of course.
Even though January 1st is celebrated as the beginning of the year over the world, as Christians, we need to consider that the Biblical New Year is far more important to us, than a day that was picked by the Romans.
1st of January and the beginning of the standard western/christian calendar 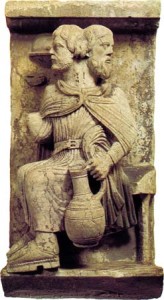 The month of January is named after an ancient Roman god named Janus/Ianus, who was the Roman god of doorways & archways, depicted having two faces, as the Romans believed he looked at the future as well as the past. As far back as 153BC, Roman consuls came to power on January 1st. In 45BC, when Julius Caesar introduced the Julian Calendar, January 1st became the official new year of the Roman Empire which has continued to be so, for more than 2000 years.

This ancient Julian Calendar which went through a few refinements in the year 1582 by Roman Catholic Pope Gregory XIII, is now known as the Gregorian Calendar. January 1st, remains from more than 2000 years ago, as the beginning of the Roman Year, a creation of the Roman Empire.
1st of Abib and the beginning of the Biblical calendar made by our Heavenly Father
The month of Abib/Aviv does not coincide with a month in the standard western calendar in any way. This means that the 1st day of the Biblical Year could fall on any day in the season of March/April. The biblical calendar is not one which is set in paper, but which is set in the heavens. When our Creator made the Sun, Moon & Stars, He proclaimed “let them be for signs and for seasons, and for days and years”.

What is Abib?
In the book of Exodus, as Moses brought about the 7th Plague which was “Hail”, we read the following

“Exo 9:31,32 And the flax and the barley was smitten: for the barley was in the ear(Abib), and the flax was bolled. But the wheat and the rie were not smitten: for they were not grown up“
The Hebrew word “Abib” is translated here as “was in the ear”. The Strong’s Hebrew Concordance explains it as – H24 – אביב – aw-beeb’ – a young ear of grain; hence the name of the month Abib or Nisan 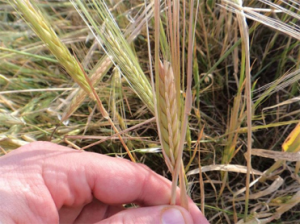 Abib is the Hebrew word used for the state of a crop which is, in between the stage of green colour ripening and completely ripe golden streaks. It is the stage when the grain is a light yellowish green colour. In the above passage we see that the barley crops were destroyed by hail while the wheat and rie were not damaged. The reason being, grains which are early in its development are flexible, becoming brittle as it ripens. The barley was destroyed and the wheat was not, as the barley had reached the stage in its development called Abib, becoming brittle enough to be damaged by the hail, while the wheat and rie were still early in their development, where they were flexible enough not to be damaged
Exo 12:2 This month shall be unto you the beginning of months: it shall be the first month of the year to you.
Exo 13:4 This day came ye out in the month Abib.
Exo 34:18 The feast of unleavened bread shalt thou keep. Seven days thou shalt eat unleavened bread, as I commanded thee, in the time of the month Abib: for in the month Abib thou camest out from Egypt
We know that after the 7th Plague mentioned in Exo 9:30,31, two more plagues came over Egypt (namely locusts & Darkness for 3 days) before the 10th plague (Death of the Firstborn). The Passover happened on the 14th day of the First Biblical Month (Exo 12:2,6,11) freeing the children of Israel from slavery. As per Exo 9:30,31 the Barley was in the state of Abib, at the time of the 7th plague. Exo 12:2, 13:4, 34:18 further proves that the month in which the Children of Israel were set free from slavery was the first month, as per God’s directions. Not only is “Abib” the first month, it derives its name from the state of Barley known as “Abib” in the Scriptures.