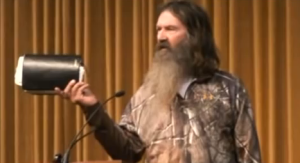 BELOVED, IN THE DAYS OF SODOM AND LOT, THE SODOMITES WERE VICIOUS AND WICKED, AS YOU CAN SEE THE MINUTE A SAINT QUOTES THE WORD OF GOD AGAINST SIN… THE SODOMITES BECOME HATEFUL AND MAKE THREATS… SAINTS DONT BACK DOWN WHEN COMING AGAINST SIN!!! AND PRAY FOR THE DUCK DYNASTY FAMILY TO STAY IN CHRIST WILLING TO DROP THE SHOW RATHER THAN BOW TO SATAN!!!
‘Duck Dynasty’ star makes anti-gay remarks

Dec. 18, 2013, 11:00 AM EST
By Tim Molloy
TheWrap
“Duck Dynasty” star Phil Robertson is under fire for bashing gays in a GQ interview in which he grouped homosexuality with “drunks” and “terrorists.”

After he complained that “everything is blurred on what’s right and what’s wrong … sin becomes fine,” the magazine asked what he considers sinful.

The remarks create a problem for A&E, the network that airs “Duck Dynasty.” The show is cable’s highest-rated reality show, and second-highest rated show overall after AMC’s “The Walking Dead.”

Also in the interview, Robertson paraphrased Corinthians: “Don’t be deceived. Neither the adulterers, the idolaters, the male prostitutes, the homosexual offenders, the greedy, the drunkards, the slanderers, the swindlers — they won’t inherit the kingdom of God. … Don’t deceive yourself. It’s not right.”

Then he offered some thoughts about anatomy.

“We never, ever judge someone on who’s going to heaven, hell. That’s the Almighty’s job,” he told the magazine. “We just love ’em, give ’em the good news about Jesus — whether they’re homosexuals, drunks, terrorists. We let God sort ’em out later, you see what I’m saying?”

“Phil and his family claim to be Christian, but Phil’s lies about an entire community fly in the face of what true Christians believe,” Cruz said. “He clearly knows nothing about gay people or the majority of Louisianans — and Americans — who support legal recognition for loving and committed gay and lesbian couples. Phil’s decision to push vile and extreme stereotypes is a stain on A&E and his sponsors who now need to reexamine their ties to someone with such public disdain for LGBT people and families.”

Robertson has said previously that the show downplays his religious views. He surprised some viewers earlier this year when a video emerged of him speaking out against abortion.