BELOVED, IM TELLING YOU THEIR IS A WAR AGAINST THE CHURCH!! IN THE DAYS OF DANIEL THE PROPHET, ALL WERE FORCED TO BOW TO THE IMAGE OF THE BEAST (EXCEPT A FEW FAITHFUL BRETHEREN), LOOK AT WHERE WE ARE… ALL PHIL SAID WAS HOMOSEXUALITY IS A SIN ACCORDING TO GOD HIMSELF… SAINTS WE ARE SURROUNDED LIKE LOT AND HIS FAMILY, WHEN WILL YOU TAKE A STAND AGAINST SIN? WHEN WILL YOU REALIZE THE HANDWRITING IS ON THE WALL!!! YOU BETTER SPEAK OUT WHEN YOU SEE SIN!! WHETHER HOMOSEXUALITY, DRUNKARDS, FORNICATORS, ECT…. SAINTS GET INTO PRAYER FOR BOLDNESS AND POWER!! AS WELL AS A HEDGE OF THORNS OF PROTECTION, BECAUSE CHRISTIANITY IS ENEMY NUMBER ONE TO THE WHOLE WORLD, THEY HATED JESUS CHRIST AND IF YOU FOLLOW AFTER HIM THEY WILL HATE YOU!!! MAY YHWH BLESS PHIL AND GIVE HIM COURAGE AND OBEDIENCE TO STAND FIRM AND NOT BOW TO THE SODOMITE BEAST.(PS: NOTICE @ THE END OF THE ARTICLE THE SODOMITE SPEAKER
SAYS…Phil and his family claim to be Christian, but Phil’s lies about an entire community fly in the face of what true Christians believe,” GLAAD spokesman Wilson Cruz said) SO BASICALLY HE IS STATING THAT “REAL CHRISTIANS” DO BELIEVE IN HOMOSEXUALITY IS OK TO YHWH….THATS A LIE AND A “EMPOWERING STATEMENT” TO TRY TO BULLY THE READER TO GO AGAINST PHIL AND THE LORD JESUS CHRIST!!! READ THIS ARTICLE 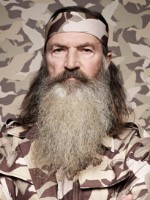 Dec. 18, 2013, 7:41 PM EST
By Tim Kenneally
TheWrap
“Duck Dynasty” star Phil Robertson has been suspended from the A&E reality series, following anti-gay remarks he made in an interview with GQ magazine.

In a statement, A+E Networks said he had been placed on indefinite hiatus.

Tell us on Facebook: Did A&E do the right thing?

“We are extremely disappointed to have read Phil Robertson’s comments in GQ, which are based on his own personal beliefs and are not reflected in the series ‘Duck Dynasty,'” the company said. “His personal views in no way reflect those of A+E Networks, who have always been strong supporters and champions of the LGBT community. The network has placed Phil under hiatus from filming indefinitely.”

Robertson caused controversy with his comments, in which he grouped gays with “drunks” and “terrorists,” and said that they won’t “inherit the kingdom of God.”

Robertson has described himself as a product of the ’60s who engaged in the sex, drugs and rock ‘n’ roll lifestyle, but has since embraced Jesus Christ as his savior.

GLAAD excoriated Robertson for the interview, accusing him of pushing “vile and extreme stereotypes.”

“Phil and his family claim to be Christian, but Phil’s lies about an entire community fly in the face of what true Christians believe,” GLAAD spokesman Wilson Cruz said. “He clearly knows nothing about gay people or the majority of Louisianans — and Americans — who support legal recognition for loving and committed gay and lesbian couples. Phil’s decision to push vile and extreme stereotypes is a stain on A&E and his sponsors who now need to reexamine their ties to someone with such public disdain for LGBT people and families.”