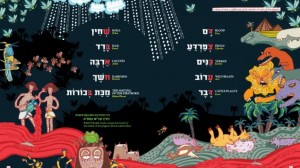 Bible study meets modern litigiousness in a story that may one day yield a riveting courtroom drama.

Ahmad al-Gamal, an Egyptian columnist for Egyptian daily Al-Yawm Al-Sabi, advocated in the newspaper on March 11 that Egypt sue the State of Israel for damages caused by the 10 Biblical plagues,

“We want compensation for the plagues that were inflicted upon [us] as a result of the curses that the Jews’ ancient forefathers [cast] upon our ancient forefathers, who did not deserve to pay for the mistake that Egypt’s ruler at the time, Pharaoh, committed,” the cranky journalist wrote, according to a translation provided by the Middle East Media Research Institute.

According to the Biblical Book of Exodus, the Egyptian king prevented Moses from liberating the Jews and leading them out of Egypt.

The plagues that summarily struck Egypt in consequence included the Nile turning into blood, an outbreak of lice, diseased livestock, boils, and so on, culminating in darkness and the deaths of all Egyptian firstborn males. The telling of the tale features prominently in the Jewish observance of the spring holiday of Passover.

“For what is written in the Torah proves that it was Pharaoh who oppressed the children of Israel, rather than the Egyptian people,” Gamal continued, “[But] they inflicted upon us the plague of locusts that didn’t leave anything behind them; the plague that transformed the Nile’s waters into blood, so nobody could drink of them for a long time; the plague of darkness that kept the world dark day and night; the plague of frogs; and the plague of the killing of the firstborn, namely every first offspring born to woman or beast, and so on.”

Gamal also pressed suing Israel for the “precious materials” used by the ancient Israelites in order to construct their desert tabernacle.

“We want compensation for the gold, silver, copper, precious stones, fabrics, hides and lumber, and for [all] animal meat, hair, hides and wool, and for other materials that I will mention [below], when quoting the language of the Torah. All these are materials that the Jews used in their rituals. These are resources that cannot be found among desert wanderers unless they took them before their departure.”

Israel isn’t the only country that finds itself in Gamal’s cross-hairs. In the same column he also demanded reparations from Turkey for damage caused by the Ottoman Empire during its invasion of Egypt in the 16th century, and from France for Napoleon’s invasion in 1798.

He also wants Britain to pay for 72 years of occupation.

The courts are unpredictable these days, but Gamal may need to wait for an “act of God” for his requests to become reality.