Kentucky Church Gives Away Guns & Steaks To Lure In “Unchurched Men” The Kentucky Baptist Convention wants to “point people to Christ” by giving away guns at Second Amendment Celebrations hosted across the state. Via Think Progress reports: 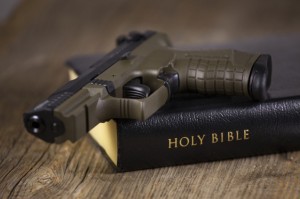 In the words of spokesman Chuck McAlister the strategy is “outreach to rednecks,” and 1,000 people are expected to attend the next event. To lure the nonreligious into the fold, the churches are offering a handgun, shotgun, or long gun as door prizes. Winners attend church for a photo-op with their new gun, but they must pass a background check before collecting their prize. “The number of unchurched men who will show up will be in direct proportion to the number of guns you give away,” McAlister told The Courier-Journal. “And I can almost tell you the number of men who would show up based on the make or model. There is a huge interest among unchurched men in the state of Kentucky regarding guns and gun rights that is even more of a draw than a toaster or money would be.” At one event in February, McAlister reportedly took the stage surrounded by guns and discussed politics, saying gun violence is “not the gun, it’s the man behind the gun,” and “criminals don’t care about a bunch of rules.” God did not come up for the first 30 minutes. After polling the audience about who had a gun, McAlister said, “We’ve got an army right here!” Firearms manufacturers, gun groups, and even the occasional congress member host controversial gun giveaways to recruit members and raise money. The Kentucky Baptist Church has found the strategy “very effective” for its own purposes, but it’s drawn criticism from other Baptists. “How ironic to use guns to lure men in to hear a message about Jesus, who said, ‘Put away the sword,’” Rev. Joe Phelps, pastor of Louisville’s independent Highland Baptist Church, said according to Courier- Journal. “Can you picture Jesus giving away guns, or toasters or raffle tickets? … He gave away bread once, but that was as a sign, not a sales pitch.” Kentucky suffers from its share of gun violence, with a higher rate of firearm homicides and deaths than most states in the country.