BELOVED, THE DEVIL HAS COME DOWN WITH GREAT WRATH BECAUSE HE KNOWS HIS TIME IS SHORT…GET INTO PRAYER AND FASTING!! WE NEED TO RISE UP AND SAVE THE YOUTH WHILE THEIRS STILL TIME. (HERE IS THE ARTICLE)
The atheist activist community in America has taken an increasingly-active role in trying to convince citizens with doubts about their faith to fully evolve into non-believers and to “come out,” publicly proclaiming their anti-theism. Think of it as a form of secular evangelism. Already, non-believers have attempted to reach clergy who are in doubt through The Clergy Project. Additionally, there’s a humanist church service each week in Tulsa, Oklahoma (and these are only two examples). Now, in addition to reaching adults, atheist activists have their eyes set on converting kids and teens.

The American Humanist Association (AHA), a group that seeks to create “a progressive society where being good without gods” is widely accepted, has launched a new outreach web site called KidsWithoutGod.com. According to a press release put out by the organization, the project’s key intention is to attract “humanist, atheist and other non-traditionally religious kids” so that they can find information that is not colored by “supernaturalism.” 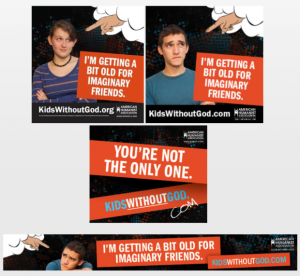 Whether they already made up their minds to reject supernatural explanations, or are just questioning, it’s time to make available an online resource that’s built just for kids without God,” explained Roy Speckhardt, executive director of the AHA.

Speckhardt goes on in the news release to explain that children being reached by KidsWithoutGod.com might be from a variety of families. Their parents, perhaps, are “traditionally religious.” Or, as the humanist leader notes, the children may be “from families like that of President Barack Obama, whose mother was a secular humanist.” Speckhardt claims that the site is a friendly community for children who may not be ready or willing to ask an adult about non-belief. 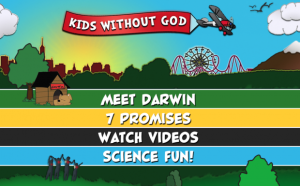 Among the educational topics that the web site touts, according to the release, are: religion in public schools, science, sexuality and discrimination, among others. One video on the children’s portal shows scientist Bill Nye describing evolution, for example. Considering that both children and teens are being reached through the project, there are two separate web portals designed for these two groups (each is accessible through KidsWithoutGod.com).

“With the plethora of websites geared toward teaching kids about Christianity, Judaism, or Islam, we’re pleased to add humanism to the discussion,” Speckhardt continued. “Kids should know there’s another way to learn about morals and values — it doesn’t need to come from traditional religion.”

In an effort to get the word out, the AHA is spending $30,000 on an advertising campaign on 140 buses in the Washington, D.C. area. In addition to these placements, there will be Internet ads on Pandora, Facebook, Google, YouTube and other outlets (the press release also notes that Disney and National Geographic Kids turned the ads down based on their content).