THIS FOOLISHNESS IS WHY SO MANY CHRISTIANS FALL OFF AND TURN FROM JESUS CHRIST!! A FAKE CHRISTIAN WILL SAY…WERKS WHATS THE PROBLEM? ITS JUST A SONG ABOUT “HAPPY” (BY THE WAY…JOY IS SPIRITUAL…HAPPINESS IS SOULISH, ALSO NOTE “HAPPY” IS THE VERY DEFINITION OF THE WORD “GAY”) BUT WHAT ARE THESE “CHRISTIANS GONNA SAY WHEN THEIR KIDS BY HIS ALBUM AND ALSO GET INTRODUCED TO MILEY CYRUS, JUSTIN TIMBERLAKE, DAFT PUNK AND MANY OTHERS (WHO ARE FEATURED ON THIS ALBUM)?? THEN WHAT SAINTS?? HOW SAD… CHRISTIANS DONT SING NEW SONGS TO GOD ANYMORE…WE HAVE TO USE SONGS FROM SATANIC MUSICIANS INSTEAD… THIS IS IT YALL…WHAT SIDE YOU ON?? MOSES ASKED THE SAME QUESTION WHEN HE CAME DOWN FROM THE MOUNTAIN AND FOUND THE PEOPLE IN SIN, I PRAY YOU “COME OUT FROM AMONG THEM” CHECK OUT THESE VIDEOS… AND SEE HOW SATAN BRINGS IN THE “TROJAN HORSE” TO DESTROY MANY “SUNDAY CHURCHES”, OH BY THE WAY…IN HIS VIDEO YOU CAN SEE THE ILL-UMINATI HAD HIM IN A CHURCH JUST TO SEE IF CHRISTAINS WERE DUMB ENOUGH TO TAKE THE BAIT….LETS SEE IF MANY DID…THE REMIX WILL COME OUT SOON..I BET THE CHORUS WILL BE…IM LUKEWARM AND NOT PREPARED, MARK OF THE BEAST IS HERE, BUT IM H-A-P-P-Y…LORD HAVE MERCY (CHECK ARTICLE UNDER VIDEOS AS WELL) 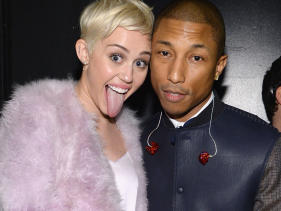 HERES AN ARTICLE ABOUT HIS ALBUM WITH THE “FEATURES”
Pharrell Williams is primed to drop his second solo album, G I R L, on March 3, and, according to a newly posted track list, it’s going to be a big old reunion for Skateboard P. Yup, the record will include contributions from past collaborators and heavy-hitters including Miley Cyrus, Justin Timberlake, Daft Punk and Alicia Keys.

Noisey posted the track list for Pharrell’s new record Friday (February 21), a list replete with girl-referencing titles (“Marilyn Monroe,” “Lost Queen,” and “It Girl”) in keeping with the album’s title.

“Women have been so good to me over this entire career and they’ve done so much for my family,” Pharrell told BBC Radio 1 with regard to the title. “Everything I’ve ever gotten is because they’ve paid for [it], so they’re, like, my bosses — indirectly and directly — you guys are like my bosses. So for me, I wanted to analyze that for a second.”

Prior to this announcement, we already knew that the album would include “Despicable Me 2” soundtrack hit and Oscar-nominated jam “Happy.” We also could have guessed that it would feature tons of guest stars; his 2006 debut, In My Mind, included appearances by Gwen Stefani, Kanye West, Snoop Dogg, Charlie Wilson, Pusha T, Nelly and Slim Thug.

G I R L’s track list, however, reads like a “This Is Your 2013” for Skateboard P, reprising match-ups with last year’s big hitmakers. The only collaborator missing, it seems, is Robin Thicke. Maybe he’ll catch P on the remix?

While we’re all waiting for more info to leak through the Internets with regard to Pharrell’s female-monikered sophomore record, might I suggest putting a bid in on his legendary Grammy hat? It’s currently available for the low, low price of $10,500.