SAINTS, AS WE GET CLOSER TO THE LAST HOUR OF THE LAST DAYS THESE DEMONS ARE GETTING BOLDER AND BOLDER…JUST AS THE DAYS OF THE LORD JESUS CHRIST WHEN DEMONS WOULD MANIFEST AND THROW CHILDREN ONTO THE GROUND OR EVEN INTO FIRE, SO SHALL IT BE IN THESE LAST DAYS, SAINTS WE NEED TO PRAY AND FAST FOR POWER TO CONFRONT THESE DEMONIC BEINGS AND BIND THEM IN THE NAME OF JESUS CHRIST AND CAST THEM OUT(MARK 16:17)!!! ITS SAD THIS WOMAN WENT TO A “CATHOLIC PREIST”(CLEARLY ROMAN CATHOLISISM IS A FALSE RELIGION) INSTEAD OF A HOLY GHOST FILLED SAINT!! FOLKS GET RIGHT WITH THE LORD AND GET POWER FROM ON HIGH!!! SAINTS WILL YOU SIT AROUND AND WATCH SATAN DESTROY THE MINDS OF THE PEOPLE? OR WILL YOU FIGHT IN THE SPIRIT AND STAND UP AS A SPIRITUAL WARRIOR? REMEMBER…WE WRESTLE NOT AGAINST FLESH AND BLOOD!!! WE DONT FIGHT WITH GUNS AND AMMO…BUT WITH MIGHTY POWERS THROUGH GOD!!! HERE IS THE ARTICLE and VIDEO BELOW (PS: PRAY FOR THIS FAMILY)

•Latoya Ammons moved into a home with her mother and 3 children in Gary, Indiana in 2011 and started hearing footsteps in the basement
•Over time, she and her children, aged 12, 9 and 8, became ‘possessed’; their eyes would bulge, they’d shake and growl
•A clairvoyant said the home was haunted by 200 demons 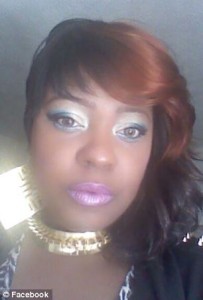 Haunted: Latoya Ammons, pictured, underwent exorcisms after she was ‘possessed by demons’
+8

Haunted: Latoya Ammons, pictured, underwent exorcisms after she was ‘possessed by demons’

A nine-year-old boy walked backwards up a wall and ceiling as startled medical staff looked on after his mother claimed he and his two siblings had been possessed by demons, according to official reports.

The unlikely-sounding event was detailed in official documents after a child services case worker and a nurse both said they saw the boy ‘glide’ backwards on the floor, wall and ceiling.

Both were shocked to see the boy apparently float after their mother had been subject to months of scepticism when she claimed her home in Gary, Indiana, was haunted and all three of her children were possessed by demons.

Latoya Ammons said her 12-year-old daughter also levitated in the home, and all three of her children showed signs of being possessed including ‘evil’ smiles and unnaturally deep voices, according to the Indianapolis Star.

Miss Ammons’ home was officially exorcised by a catholic priest who said the ceremonies were officially authorized by the Diocese of Gary.

Police also observed strange goings on at the house and a captain of the city’s force has said he ‘is a true believer’ that the house is haunted.

After a string of apparent paranormal events at the house hardened police officers – including the local captain – even declared themselves too frightened to stay there after nightfall and numerous city officials refused to go to the property.

Mother-of-three Ms Ammons, 32, said she was only rid of the spirits that haunted her family’s home in Gary after she moved away and underwent multiple exorcisms and police dug under the house to check for graves.

The Indianapolis Star obtained hundreds of pages of official documents and carried out more than a dozen interviews with police, the Department of Child Services, psychologists, relatives and a priest to uncover the bizarre details – which seem like something straight out of a horror movie 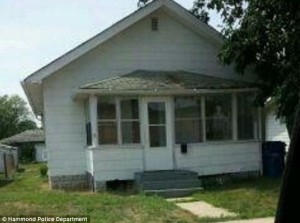 The clairvoyants warned that the home was haunted by more than 200 demons, Ammons said.

Despite their efforts, they still felt the demons in the house and the children showed increasing signs of being possessed, Ammons and Campbell said.
The children’s eyes bulged, wore evil smiles and deepened when they were taken over by the demons, they said. The youngest boy would sit in a closet and talk to a child no one could see, and on one occasion, he was thrown from the bathroom, Campbell said.

Ammons would also be taken over and said she felt weak and warm, and her body would shake.

Fears: Ammons, pictured, said she saw her daughter levitating in a bedroom. A nurse and a CPS worker later reported seeing her nine-year-old son run backwards up a wall before flipping over to the ground
When Ammons went to their doctor, Dr. Geoffrey Onyeukwu, he went with medical staff and child services personnel to meet the children – who cursed at him in low voices, Campbell said.

During the visit, a DCS report said the youngest child was ‘lifted and thrown into the wall with nobody touching him’. The boys were taken to hospital.

Before the incident, someone had called the DCS and asked the agency to investigate Ammons for possible child abuse or neglect, speculating she might have a mental illness.

While in the hospital, a psychiatrist evaluated Ammons and concluded that she was of ‘sound mind’.

DCS family case manager Valerie Washington also interviewed the family while they were at the hospital and said the youngest boy began growling and his eyes rolled back in his head.

Washington added in her DCS report – which was corroborated by a nurse – that the nine-year-old boy displayed a ‘weird grin’ and then walked backward up a wall to the ceiling. 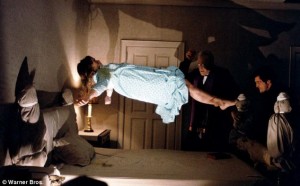 Ritual: Ammons went through 3 exorcisms, as famously depicted by the 1973 movie, The Exorcist, pictured

EVICTING THE DEMONS: WHAT DOES AN EXORCISM INVOLVE?

Exorcism is the practice of ridding a person of demons or other spiritual entities that they have been possessed by.

According to the U.S. Conference of Catholic Bishops, signs of demonic possession include superhuman strength, aversion to holy water, being able to speak in unknown languages, spitting and cursing.

Most religions claim that humans can be possessed by demonic spirits and even though it might seem archaic, exorcisms continue to be performed.

In Ammons case, the Catholic exorcism involved prayers, statements and appeals to cast out demons. The priest praised God and condemned the devil and pressed a crucifix against Ammons’ head as he spoke. The priest noticed her convulsing and said that was a sign that the demons were strong. After she fell to sleep, he gave a prayer of Thanksgiving.

But exorcisms can have deadly consequences. In 2003, an autistic 8-year-old boy in Milwaukee, was killed during an exorcism by church members who blamed thought a demon was to blame for his disability. In 2005, a nun in Romania died after a priest bound her to a cross during an exorcism, gagged her and left her for days without food or water.
.
‘There’s no way he could’ve done that,’ the nurse told the Star.

Washington said in a police report that she believed an ‘evil influence’ could be affecting the family.

And when asked if the boy had walked up the ceiling in an acrobatic maneuver, she said it was in fact a slow glide that could not have been performed naturally.

The children were taken into custody by child services after workers found Ammons was neglecting their education; she said it was because the ghoulish activity kept them up all night.

But records from clinical psychologists also indicate that the younger boy acted possessed when he was asked questions he didn’t like.

Later, Washington went to the home to check on its condition and was joined by three police officers.

During the visit, one of their recorders malfunctioned and another recorded audio in which a voice whispered ‘hey’, according to police records.

They also took photos of the house and when these were looked at later, it appeared as if cloudy faces were in the images.

The police chief added that, after he left the house, the radio in his car malfunctioned and that his garage later refused to open.

Even more chillingly, Austin said the driver’s seat in his other car started moving backward and forward on its own – which could have caused an accident, according to his mechanic.

During a second visit to the home, in May 2012, they were joined by a priest, Reverend Michael Maginot, who had been asked by a hospital chaplain to perform an exorcism on one of the boys.

While at the home, a DCS family case manager said that she touched liquid she saw in the basement and later suffered finger pain and felt as if she was having a panic attack.

‘We felt like someone was in the room with you, someone breathing down your neck,’ she said adding that she later experienced a serious of medical problems, from burns to numerous broke bones.

After the visit, Maginot performed a minor exorcism on Ammons which consisted of prayers, statements and appeals to cast out demons.

But after he says he was given the go-ahead by Bishop Dale Melczeck of the Diocese of Gary, he decided to carry out three more powerful exorcisms on Ammons in his church in Merrillville in June 2012. Police officers were present.

‘I was hurting all over from the inside out,’ she remembered. ‘I’m trying to do my best and be strong.’

Afterwards, Ammons, who had moved homes to Indianapolis, said that the problems subsided. After six months, she regained custody of her children.

The house in Gary now has new tenants, but the landlord said there have been no further problems at the address.

Of the bizarre activity at her former home, Ammons said: ‘When you hear something like this, don’t assume it’s not real because I’ve lived it. I know it’s real.’