Miss a call from a strange number? Think twice before you call back.

That’s the message from the Council of Better Business Bureaus, which says crooks have been targeting unsuspecting cell phone users with a missed call scam. 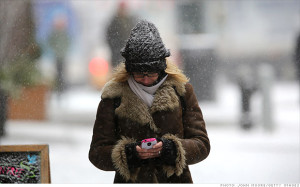 Mary Power, head of the group, says there have been many complaints from consumers across the U.S. and Canada who say they’ve been stuck with unexpected charges after returning calls from strange numbers. The numbers then connect victims to expensive adult entertainment services or international chat lines.

“We think young people are particularly vulnerable because many don’t like using voice mail,” Power said. “Even if they don’t recognize a number on the Caller ID, they just hit redial, and scammers are taking advantage of this pattern of behavior.”

The charges are often only a few dollars, so as not to attract suspicion, though some victims are billed around $20 for unwanted “premium services.”

The numbers used in the scam typically originate from area codes in the Caribbean, including 876 (Jamaica), 473 (Grenada), 284 (British Virgin Islands) and 809 (Dominican Republic). The callers typically hang up after a ring or two.

The Federal Communications Commission recommends looking up any unfamiliar area codes before you return calls, and considering having your wireless company block outgoing international calls on your phone if you don’t otherwise make them.

Should you fall victim to the scam, first try resolving it with your phone company; if that doesn’t work, you can file a complaint with the FCC.

AT&T (T, Fortune 500) spokeswoman Mari Melguizo said the company would work with customers victimized by the scam “on an individual basis for reimbursement,” and recommended that consumers consult a list of tips on the subject from the Maryland Better Business Bureau.

“It’s always important to be aware of what’s on your monthly bill in case something seems out of place,” Verizon spokeswoman Debi Lewis said. To top of page