Pastor Daniel, who is the founder and Head Pastor at Rabboni Centre Ministries, situated at Zone 2 Ga-Rankuwa, north of Pretoria, said he was basically trying to prove that humans can be controlled by the spirit and they can eat anything to feed their bodies.

The Pastor successfully convinced his church members to go outside the church and start eating grass, he was even spotted stepping on some members in the church while they all clinged on to each other on the floor both male and female.
(PHOTO: RABBONI CENTRE MINISTRIES) 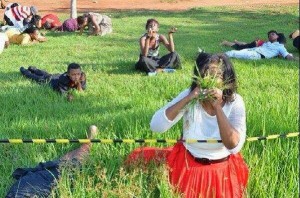 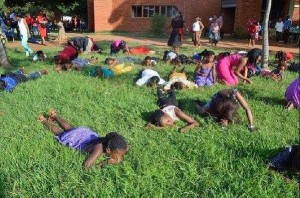 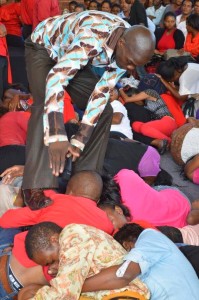 “There were many disciples and you don’t know others. Let God show you as they were deliberately not revealed in the Bible because God wanted someone to do them, new things. Nathanael was a disciple yet there is no book of Nathanael, what about the miracles, signs and wonders, what about how they them who were not mentioned, taught,” said Lesego.

“Come and eat so that your eyes may see. Simon Peter said: I am going fishing, this is wrong. He went back to the earthly position where Jesus found him. These are the types of miracles that will cause many to repent because this is the message through miracles, signs and wonders. Jesus did not come in a friendly manner because they were doing what Jesus did not tell them to do,” Lesego explained to his followers.

“Paul says: I carry the death of Christ in me because he ate the body. Here we see the demonstration of John 14:12-14 ‘Very truly I tell you, whoever believes in me will do the works I have been doing, and they will do even greater things than these, because I am going to the Father. And I will do whatever you ask in my name, so that the Father may be glorified in the Son. You may ask me for anything in my name, and I will do it,’” he added. (Reported by Leonardo Blair, CP Reporter)