SAINTS, PASTOR G CRAIG WARNED US THAT “HIP HOP” WOULD GET WORSE AND WORSE….THEIR IS A REASON THESE MUSICIANS ARE LABELING THEMSELVES “GODS”… THE BEAST IS RISING AND WE NEED TO PRAY AND FAST OUR WAY INTO THE HOLY OF HOLIES!!! SAINTS GET CLOSER TO JESUS CHRIST!!! HERE’S THE ARTICLE FROM “VICE”. (PS: I WONDER IF ANDY MINEO IS GONNA JOIN THIS RELIGION…? AFTER ALL HE PUBLICLY SAID HE LOVES KANYES MUSIC AND IMAGE) HERES THE ARTICLE…READ ON 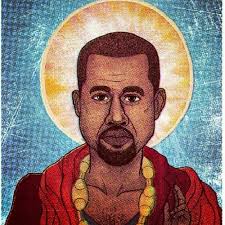 I often joke that, for me, listening to Kanye West is like a religious experience. Apparently, for some people, this is not a joke. Enter the best religion of all time: Yeezianity.

The church of Yeezus was founded about a month ago by a man who doesn’t want to tell me his name, because he fears that any name-association with the religion will ruin it’s goal to help people anonymously. According to the founder, in order to become a member of Yeezianity, you just have to believe in the principles—and in that moment, you become a member. The group follows what they call the “5 Pillars,” which are as follows:

1. All things created must be for the good of all
2. No human being’s right to express themselves must ever be repressed
3. Money is unnecessary except as a means of exchange
4. Man possesses the power to create everything he wants and needs
5. All human suffering exists to stimulate the creative powers of Man

As of this moment, Kanye probably doesn’t know about the religion that carries his name, but one would imagine he’d approve of the positive message about viewing yourself as a god. The founder of Yeezianity recently took out a Craiglist ad in hopes of gaining membership—and publicity. But before you start tweeting about how ridiculous this whole notion is, how this dude is probably just looking for internet fame, take note that the founder recognizes the absurdity of it all, and still requests to remain anonymous.

With hopes of understanding why someone would ever want to base a religion on a rapper who wears a discoball on his head while he performs, I called up the founder.

So, Yeezianity.
I created this thing about a month ago—and all I did was tweet it, and I don’t have a lot of Twitter followers, so that didn’t go anywhere. I was putting up other Craigslist ads and I just thought, “Well, let’s see where this goes.” I got some responses. I mean, you found it, so that’s pretty awesome.

What have the responses been like?
The diversity has been substantial. There have been people who’ve sent me just straight up support—they must like the positive message about it. And then there are some people who’ve sent me a lot of Kanye hate mail, but that’s cool. For example, on reddit, somebody posted and said, “Stupidity attracts itself.” [Laughs] But I was like, hey, you could substitute that word for genius or anything else you want. Even a homeless dude sent me a reply, and asked if we could help him get on his feet. That’s why I want to stay anonymous. I can speak to whomever I want with authority, and they won’t know who I am. But on the whole, I mean, people who do and don’t know who Kanye is alike probably think this is absurd.

First question: Is Yeezianity for real?
I believe in what it is, and that’s real. But is there a real organized religion behind it? There is not. At first, I thought about putting on that it was—I thought that’d be more viral or whatever—but I’m not going to be able to uphold that. So right now, it’s just an idea. I only created this a month ago, so we’ll see where it goes. The idea has yet to get out there. Who knows what could come this way? But it’s an idea, and before anything can manifest, it has to start as an idea. In a lot of ways, after I created it, I reflected on it and thought that this was just a rehashing of Christianity, but just throwing Yeezus instead of Jesus.

And you know what? That’s why I felt Kanye did it. He just put the name there. Jesus has all this baggage and all these connotations, and Yeezus is this new thing—and that’s why I say in the “Our Savior” part of the site, “We don’t speak of his public persona.” Because Yeezus is when Kanye elevates to that God-level, which I feel like we all have the potential to do. That’s why if it takes off, in the future, people would forget Kanye and his antics, and instead focus on what the message is.

So you’re not approaching Kanye as a “god,” per se, but you’re instead approaching him as someone who inspires you.
Exactly. He’s a god. You’re a god. Why Yeezus is the figure is because Kanye is the one who believes that the hardest, so that’s why he’s the model for behavior.